In Farchant, traditions and customs are present everywhere and in every season. Here, music, dance, and theater are just as much a part of life as apples in apple pie.

We cordially invite you to come and celebrate with us! Many of our fests are of religious origin. Just as many, though, are simply an expression of our joy of living or Lebensfreude!

The prettiest melodies
During the main season, you can look forward to our popular spa concerts twice a week. This is when the local band, the Farchant Musikkapelle, plays an open-air concert in front of the town hall. Melodies that are sure to ring in your ears as a souvenir long after your vacation.

Experience the Bavarian joy of living live!
The Farchant comical farmers' theater is another local entertainment you don’t want to miss. Enjoy lots of Schadenfreude (malicious glee), some self-insight, and usually a happy end!

Forest fests in Farchant near Garmisch-Partenkirchen
The magnificent forest fests in the Kuhflucht Nature Park draw guests from the entire region. Farchant’s local club for traditional costumes, the Trachtenverein, provides a memorable ambiance with brass music accompanied by traditional dances and costumes.

Most people wouldn’t expect a small village of just 3900 inhabitants to have a long and rich history. Farchant far surpasses many a well-known major city when it comes to centuries, such as the Bavarian capital of Munich, which lags behind by half a millennium.

As early as 1200 BC, amber traders from the Baltic Sea region trod a trail through the bogs and virgin forest of the Zugspitzland region in order to trade the raw material from the North in exchange for highly coveted finished products from the South.

Starting around 200 A.D., the marching steps of the Roman cohorts and the calls of southern wagoners began ringing through our valley: In the meantime, by a technical feat, the Romans had developed what had become a treacherous trail into a road for armies and trade connecting northern Italy and southern Germany.

The road through Zugspitzland outlived its Roman builders by several centuries. Around the year 600, after the Roman Empire had long fallen, the Germanic Baiuvarii came from the foothills of the Alps and followed the ancient road into the alpine valley where they ultimately founded Forahaida (= cedar pine moor, Farchant) and Germarsau (Garmisch). The cemetery of the first inhabitants of Farchant who had settled in the area of the northern main street was discovered during construction of the railway last century: Single row graves, Germanic and without Christian grave goods.
Namely, the inhabitants of Farchant didn’t convert to Christianity until approx. five generations later. Around 750 A.D., Irish and Scottish monks went on missions in our region, and we can safely assume that a church was already built in our village in this period. A little later, in the year 807, the Bishop of Freising and a count from the Upper Inn Valley fought over the church’s ownership of the St. Andreas church. This was the first time that Farchant was mentioned in an official document.

Around 1200, Duke Otto of Merania from the formerly powerful noble Bavarian Andechs family had the Werdenfels fortress built south of Farchant in order to protect the valley basin and the Augsburg-Venice imperial road. Then, however, the Bishops of Freising bought the County of Werdenfels - and our town as a result - in two extensive purchases in the same century (1249 /1294). For half a century then, it was rightly said: “Happy the tenant whose landlord bears the crosier! “ This applied in two ways. Not only was the landlord a bishop, most of the farms of Farchant belonged to numerous abbeys (Polling, Dießen, Ettal, Benediktbeuern, Schlehdorf, among others), which they sublet to their Grundholden (farmers who worked on their own farms, but had to pay taxes to the landlord). Like everywhere in the Holy Roman Empire of the German Nation, there was also political and religious unrest in the Werdenfelser Land region in the 16th and 17th centuries. An attack on the Emperor in Innsbruck by the Protestant leader, Moritz von Sachsen (1552),a witch trial in Garmisch with four women sentenced and burned (1590), mass deaths during the years of the plague, 1633/34, and construction of the Schwedenschanze (an embankment built for protection against enemies) north of Farchant.

Between 1700 and1800, the village under the Fricken mountain with a little over 300 inhabitants experienced an unexpected economic and cultural upswing. In 1728, the inhabitants of Farchant commissioned the master mason of Munich, Johann Mayr, to build a new Baroque church in place of the old Gothic church – using stones from the ruins of the Werdenfels fortress. Local timber rafters travelled all the way to Hungary on timber rafts for months at a time, taking with them timber, limestone, gypsum, and livestock. Others ran trading stations in Warsaw, Berlin, Hamburg, or Bremen as successful merchants. Sons of farmers became students and priests. The leather and wood processing trade also flourished. The upswing was so remarkable that Tyroleans and Bavarians now referred to the county as the “Golden Land “. In Farchant alone, the total property of the population almost tripled in those 100 years, increasing from 30,000 guilders to 88,000 guilders. Close to half of the 73 homes existing at that time were torn down in this period and then rebuilt in accordance with the new conditions. Most of the houses in the village center that are still intact today date back to the second half of the 18th century. In 1793, after a generous religious endowment, Farchant finally received its own clergyman and a teacher who had to teach close to 40 children in the small parish school room. In an effort to beat the Austrians, Bavarian troops occupied the County of Werdenfels in the summer of 1802 after the state system of the Bishops of Freising fell in the turmoil of the Napoleonic Wars. Our village changed landlords, just like the 6000 or so inhabitants of the Werdenfels region. The bishops were followed by the white-and-blue electors and kings. The demise of trade, devastating epidemics (cholera in 1836), and livestock plagues (1842), along with the significant restriction of the rights to woodlands as wood suppliers, all contributed to the noticeable impoverishment of the population. The Munich-Garmisch railway line that was opened in 1889 ended up increasingly changing the village and the entire valley. The timber rafting and carrying trades continued to shrink, while more and more city dwellers discovered the countryside under the Zugspitze. These were the beginnings of tourism – the most important source of income in the region today.

After the end of World War II, Farchant became a parish and exceeded the threshold of 2000 inhabitants after accommodating numerous expellees

The Farchant tunnel, which directs traffic around Farchant instead of through the village, was inaugurated In May of 2000 – this bypass breathed new life into the village that was once plagued by almost constant traffic jams. 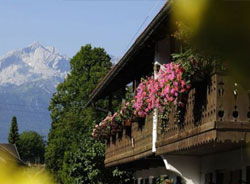